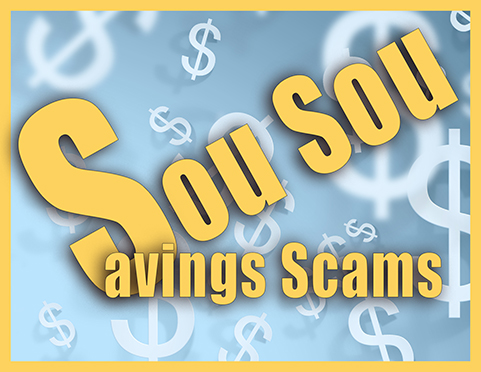 SouSou savings clubs are becoming more and more common in the United States. But beware! Many scammers are capitalizing on them to steal money, instead of using them for their original intent.
What is a SouSou Savings Club? It is a club, usually among close family members or close friends, used to save for larger items when cash is hard to come by. Each member puts in a designated amount into the savings club on a specific date each month. For example, let’s say each member puts in $25 each month and there are 8 members. Each month, all 8 people contribute a total of $200. At the end of the first year, there would be $2400 in the account. One person is chosen to receive a disbursement for an item they need. The members keep contributing, including the person that received the disbursement, to replenish the fund. Then, at a designated time, presumably when the first funds from the first disbursement have been replenished, the second person is chosen to receive a disbursement for a larger item they need. Contributions and disbursements continue in this manner until all members have had their chance at a disbursement, which is essentially a loan, from the fund. These clubs are usually limited to a small number of family members and are usually only used in communities where money, banking, and lending services are extremely limited.
Scammers in the United States and abroad are now using this savings and lending model to bring people into their fake clubs. But unlike a true SouSou club, they are stealing the contributions of the members, no disbursements are ever made, and the scammer is never seen again.  An offshoot of this scam is to use it as a pyramid scheme whereby the top organizers glean a commission from those who contribute, and then they bring in more members to contribute.  Those new “managers” are promised a commission on the new members that they bring in.  It is a never ending cycle of deceit.
If someone approaches you about joining a SouSou savings club, or any type of savings and lending club that follows a model similar to what is described above, beware. They serve a great purpose for the under-served if run with honesty and integrity. But in the United States, it’s more than likely, a scam. If a close family member, friend, or stranger approaches you, ask a lot of questions and think twice before you join.  It’s better to join a tennis club and put your savings into your credit union!

Our Online and Mobile Banking gets 4.8-5.0 Star Reviews!

Teen Finance: Should My Teen have a Checking Account?

Donation to the Veterans of Foreign Wars