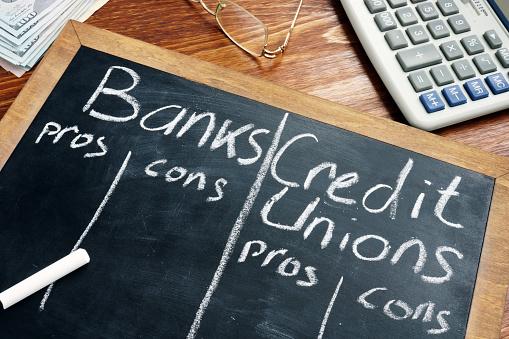 As a member of American Southwest Credit Union, you know that credit unions are always striving to serve their members and community in as many ways as possible. We value each member’s input as an equal owner in the credit union, and offer flexible loan terms as well as low-cost accounts. We also reward our members with higher dividends, and proudly donate our time and our resources to community initiatives and organizations.

Both credit unions and banks provide those they serve with a broad range of financial services and products. However, there are multiple distinctions between the two institutions. The primary credit union difference lies at its core: Banks are created to generate profit for their owners; credit unions are created to provide members with a place to manage their finances at the best possible terms.

The noble goal of putting members first is deeply rooted in the rich history of the credit union movement. Let’s take a quick look at the backstory of credit unions and how they came to be the thriving financial institutions we know today.

The first credit union was established in 1864 by Friedrich Raiffeisen in rural southern Germany. Raiffeisen believed his neighbors and friends could enjoy an enhanced standard of living if only they had access to common funds. He proposed that all community members pool their resources so individuals in need of loans could easily access the necessary funds. Raiffeisen’s idea was well received by his community, and the first credit union model was soon established.

In 1909, the credit union movement crossed the ocean to reach American shores. With Edward Filene serving as its pioneer, the movement gained momentum and continued its growth. In 1920, Filene hired attorney Roy F. Bergengren to assist him in generating the movement’s expansion. Bergengren soon created a more systematized concept for the credit union model we know and love today.

Credit unions were gaining popularity and popping up all over America, but it was only in the 1930s that the credit union movement achieved federal recognition and national acceptance.

The Federal Credit Union Act enhanced the public’s confidence in the credit union movement, and it continued to spread across the country. In 1970, that sense of security grew stronger when the National Credit Union Share Insurance Fund (NCUSIF) was established. Credit union deposits gained federal insurance that functions much in the way the FDIC insures bank deposits. Your money is always safe at American Southwest Credit Union!

With the credit union movement growing at its most rapid pace, prospective members flocked to join the new member-owned financial institutions being established all over the U.S. In fact, between 1970 and 1979, credit union assets in America tripled.

In 1977, another credit union-friendly regulation was signed into law, empowering credit unions to offer more services and products to their membership, most notably mortgage lending and share certificates (which function much like CDs).

Today, the credit union movement continues to thrive in the path charted by its predecessors and is backed by the “full faith and credit of the United States Government.” These not-for-profit institutions serve more than 103 million members by always putting their members’ needs first and helping them achieve their personal goals through sound financial practices and targeted advice.

American Southwest Credit Union is proud to be a part of the collective institutions dedicated to the credit union mission. At the core of our values is an unwavering commitment to create mutual benefits for members and the larger community. To that end, we are always here to help our members and enable them to optimize their savings or manage their finances as smoothly as possible.  As a member-owned institution, our only objective is your satisfaction and your success.